How Does a Heat Pump Work?

Whether you’re looking at our WPH-3000, a portable AC with a heater at your local hardware store, or even a geothermal heating system, you might be wondering how a device that’s used as an air conditioner can also be used as a heater — and a pretty efficient one at that. But as it turns out, the technology that enables us to absorb heat from an indoor environment and reject it outside only needs a slight modification (and a few extra components) in order to work the other way around, thus turning an “air conditioner” into a “heat pump”. Here’s a quick overview of how heat pumps work.

Back to the basics

To understand how a heat pump works, it’s important to start by looking at the function of ordinary air conditioners. In essence, refrigerant-based air conditioners work by pressurizing and depressurizing refrigerant to manipulate its temperature, state, and ability to absorb and reject heat. This process happens in four stages. 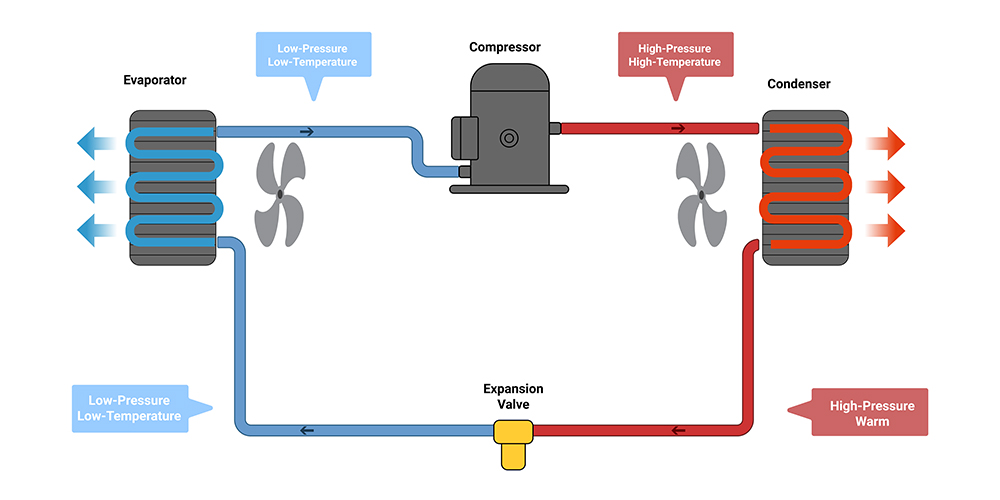 After the compressor, the refrigerant travels to the condenser. This is simply a coil of refrigerant piping where temperature exchange occurs, in this case the rejection of heat. Air is drawn through the outer surface of the condenser coil, absorbing the heat and rejecting it outside of the cooled space. Condensers are usually either located outside or utilize outside air to absorb heat, but at the very least, exhaust air is always rejected away from the space that needs to be cooled.

As a result of the temperature exchange, the refrigerant cools down and condenses into a warm liquid, making it ready for the next stage of the process: the expansion device. In most refrigeration systems, this is a thermostatic expansion valve. This depressurizes the refrigerant, similar to holding your thumb over a hose and letting out a fine mist of water or spraying a mist of window cleaner out of a bottle. The result is a low pressure, low temperature refrigerant mostly in a liquid phase.

Expansion valves are typically located close to the last stage of the refrigeration process, which is the evaporator. This is another coil used for temperature exchange, this time for the absorption of heat from air. The cold refrigerant passes through a coil similar to the condenser, and in turn it absorbs heat from air being passed through the outside of the coil. Since the refrigerant has a very low boiling point, even air that feels very cold to us has enough heat to cause the refrigerant to boil. This turns the liquid refrigerant back into a vapor, making it ready to enter the compressor and begin the process all over again. Any heat collected in the evaporator will eventually be rejected as refrigerant passes through the condenser, allowing the system to effectively take heat energy from one location and move it to another.

A slight tweak to the system 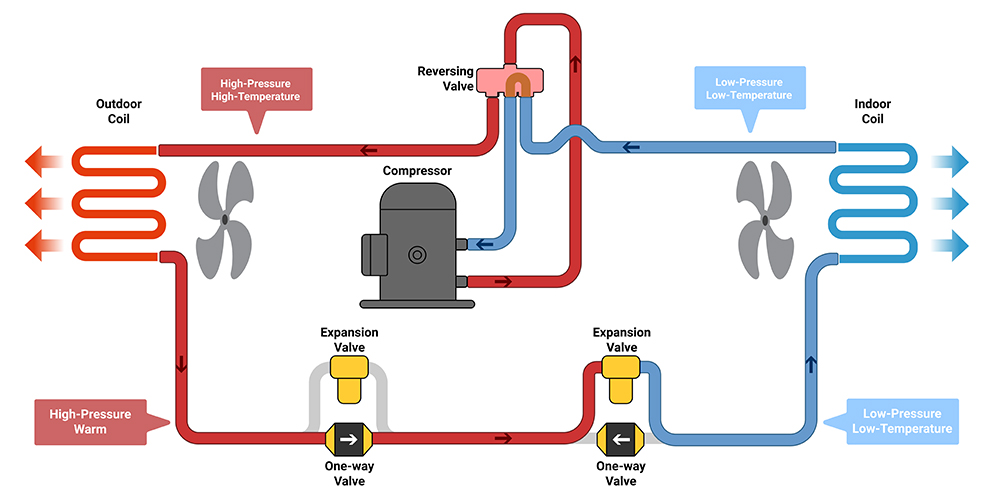 As demonstrated in the diagram above, an air-source heat pump system is very similar to an ordinary AC, but with the addition of a few key components. One new component is a reversing valve, located between the compressor and the two coils. Two ends of the valve go to each end of the compressor, while each of the remaining two ends lead to one of the system’s coils.

A slight difference is the way we refer to the coils in a heat pump system. As you’ll see further down, either coil can be used as a condenser or an evaporator, so we’ll refer to them as the indoor and outdoor coils. In a cooling cycle, refrigerant travels from the compressor to the outdoor coil, just like an air conditioner would.

The final difference between a heat pump and an AC is the addition of another expansion valve, as well as two one-way valves. The one-way valves only allow refrigerant to pass through in a single direction, as the name implies. In the cooling cycle, refrigerant passes through the valve right after the outdoor coil, which allows it to bypass the currently unused expansion valve.

Afterwards, the refrigerant travels to the second one-way valve. However, this valve’s direction is set for the other direction of flow, so this refrigerant can’t pass through it. It is forced to go around the valve and pass through the expansion device, thus preparing it for evaporation in the indoor coil. After absorbing heat from the cooled space, the refrigerant leaves the indoor coil, travels through the reversing valve, and re-enters the compressor through the suction side. The function of this cooling cycle is no different from an ordinary AC.

Seasons change, and so does a heat pump 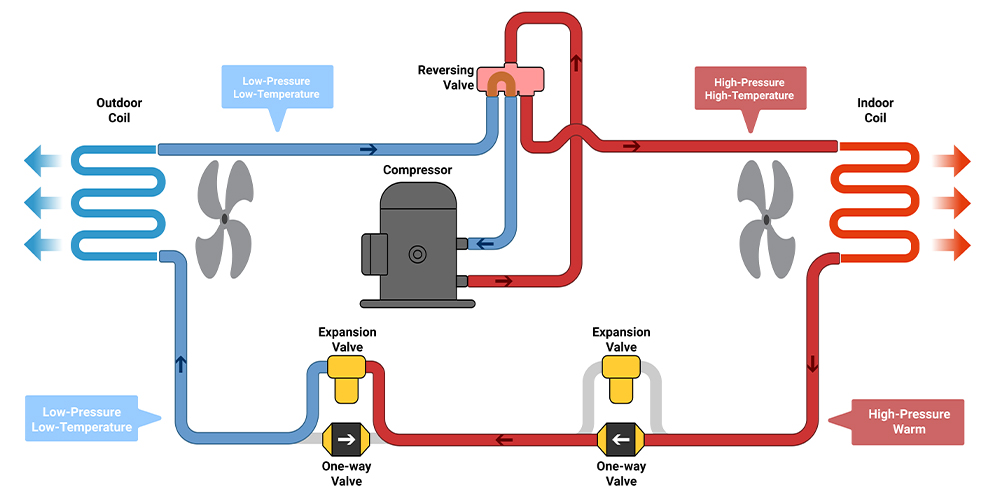 When it’s time to stay cozy instead of staying cool, switching a heat pump to a heating cycle is fairly straightforward. All it takes is a change to the reversing valve’s position. Now in its second position, the reversing valve directs hot, high-pressure refrigerant from the compressor to the indoor coil, so any rejected heat is brought indoors instead of being dumped off outside.

Now in the outdoor coil, the low-pressure and low-temperature refrigerant absorbs heat from the outside air. It may seem counterintuitive to try picking up heat from air so cold that it hurts your face, but refrigerant was specifically designed to work in these kinds of conditions. At the low pressures typically seen in evaporative coils, the boiling point of many refrigerants is extremely low. Thanks to the thermodynamic properties of refrigerant, it has no problem absorbing heat from 0°F outside air and rejecting it into indoor air that’s 65° F and higher.

This is how a heat pump functions, specifically the air source heat pumps used in portable machines and some home systems. Other geothermal systems can absorb heat from and reject heat into nearby ground, or even a body of water such as a pond. These systems are even more efficient thanks to the predictably stable temperatures of the earth; past a certain depth, the earth stays around 55°F year-round. The ground is cool enough to absorb rejected heat better than the air outside on a hot summer day, but warm enough for the heat pump to absorb all the heat it needs during the winter.

Thanks to the amazing technologies created by countless brilliant individuals and teams over the course of history, we’re able to adapt our environments to meet our exact needs. Where there’s heat energy, there’s an opportunity to move it where we want, and this is thanks to the beauty of refrigeration, as well as our command of thermodynamics and physics.